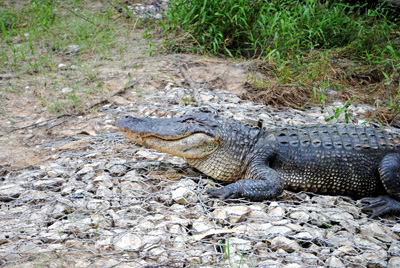 All Telonics equipment is built to order and customized for specific species and projects. Crocodilians are typically instrumented by tying a VHF transmitter or satellite-linked model to the back of the head or neck. Implantable VHF transmitters have also been used on crocodilians.

Current applications with crocodilians where GPS data is transferred from the animal to users via a satellite system use either the Iridium or Argos satellite system. Argos can also be used to obtain positions without use of GPS, but models including GPS receivers provide much more accurate positions (typically within 20 m) compared to Argos-only models (~1km accuracies). For many applications, Iridium offers several advantages compared to Argos, including world-wide continuous availability, less-expensive data transfer, and that it is a 2-way system. The 2-way link provides a number of benefits, including the unit on the animal "knowing" whether or not data was received by the satellite and thus whether or not it should be tried again; and various programming options including auxiliary schedules and geofencing.

VHF models; as used for tracking from the ground, boat or aircraft; have also been used on crocodilians. Various hermetically-sealed MOD models have been used; including the MOD-125, MOD-400, and MOD-500. These can be provided with flat tabs or metal attachment loops. Additional information on these MOD configurations (which are used on collars for other species) is available at the following links:

The IMP/200/L and IMP/400/L Implantable VHF models have also been used on crocodilians.